I am not ashamed to say it but I love the Hardmoors series of events. These are all currently based around the North Yorkshire Moors area, which is close to home for me, but the main appeal has to be the friendliness of the races and the people involved (okay the routes and surrounding area are very appealing too!). I say currently as there is a rumour that they may start to include the Yorkshire Wolds too! Even closer to home for me 🙂

There are other race series that can quite rightly claim the same, but not as close to my doorstep!

The Hardmoors 30 is a 31 mile trail race starting and finishing in the small fishing village of Robin Hood’s Bay, located on the east coast and located within the North York Moors National Park. 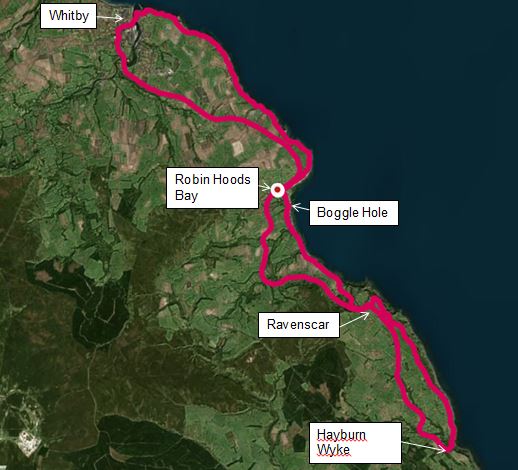 In fact, including the start and finish, you will see this village three times during the race as it runs in a figure of eight taking in the coastal path of the Cleveland Way and the old Whitby to Scarborough coastal ‘railtrail’.

One further thing I have yet to mention is that the race is held on News Year Day! This isn’t a problem to me as I tend to not celebrate the start of the New Year by getting inebriated! Other friends, including some runners, think I am barking mad to spend New Years Day running along the Yorkshire Coast

This is my third year of running the race. My times varied dramatically on the first two occasions. The first time it was a lovely, crisp and sunny day and I came in around the six hour mark. The next time was a really windy, wet and cold day. So windy that it stopped you moving at times; so wet that my poor choice of waterproofs left me soaking wet; and so cold that I was on the verge of hypothermia and threated to pull out at one point. The finish time that day was around 7 hours 15 minutes.

On this occasion I was prepared. My running has been improving over the last few months since joining the local running club (and losing a fair bit of weight!) and I had the right gear to prepare me for the potential bad weather (they say you learn by your mistakes and I have learnt a lot from mine especially with regards to the right kit to wear!).

We chose to stay overnight at the local Youth Hostel at Boggle Hole (which also happened to be on the latter part of the route). Boggle Hole is an inlet near to Robin Hoods Bay and where smugglers used to bring ashore their contraband. I can recommend the Youth Hostel to stay if you are in the area, however on New Years Eve, we had to contend with noise from the other residents partying until the early hours. Not a good way to get a good night’s sleep before a race!

The race start was at 9.30 on New Years Day, so at least being nearby we could have a kind of lie-in.

My girlfriend was helping out by marshalling the race in Whitby, the first checkpoint of the race, so it was not long after arriving at Fylingdales Village Hall, in Robin Hood’s Bay, that she had to leave to get the checkpoint set up. Meanwhile I touched base with my Hardmoors and running club friends who also thought this the better way to start the year.

At 9.30, Jon Steele, the race director, counted us down and we were off. The first part of the race from Robin Hoods Bay to Whitby is quite a fast section. Running on the cinder track of the old railway line, it is firm underfoot and not too hilly. Any hills are gradual and you find that you are basically climbing slowly for 3 miles before heading downhill towards Whitby. I was running a bit faster than the pace I intended to, but knew I would lose this on the next section on muddy ground.

I was running with my new OMM Kamleika jacket on and a Rab mountain cap as the rain was enough to make you wet quickly and the wind would soon cool you down. However that meant that it was a little bit too warm along this stretch, especially when you ran through a wooded / sheltered section.

After refilling my bottles and grabbing some food at the first checkpoint in Whitby, I headed down into the town and towards the 199 steps that lead up to Whitby Abbey. The race instructions stated that you had to run up the steps! Who are they trying to kid!

At the top of the steps you get a lovely view of the coast and the town. Google Whitby and you get some lovely images of the Abbey and the view from the steps!

The course up to now had been relatively sheltered. Now we were on the exposed coastal path and open to the elements. The next checkpoint back at Robin Hoods Bay was still a good 6 miles away. Meanwhile we had to contend with rain, hail, sea spray blown into your face from up the cliffs, wind and plenty of mud. It is this leg that will make your life a misery if you get your kit wrong. Especially the choice of shoes.

There are few trail running shoes (in my opinion) that give really good grip in the mud yet comfortable on the harder packed cinder track. I took the choice of having good grip in the mud. Saying that I had recently bought some new Inov-8 X-CLAW which are almost a cross between the Mudclaw and my Scott Kinabalu. The Kinabalu are my ‘go-to’ shoe for hard packed long distance races and are really comfortable for my size 13 feet. The X-CLAW I have found to be really comfortable over distance too, wider than the Mudclaw and with the same sole! I will have to do a kit review on these awesome shoes!

Even so the mud was slippy and I did well not to finish up on my backside! I passed one runner holding the hand of a girl dressed in ‘normal’ clothes and walking boots and struggling with the mud. It turns out they didn’t know each other and he had decided to help her out across a tricky section! 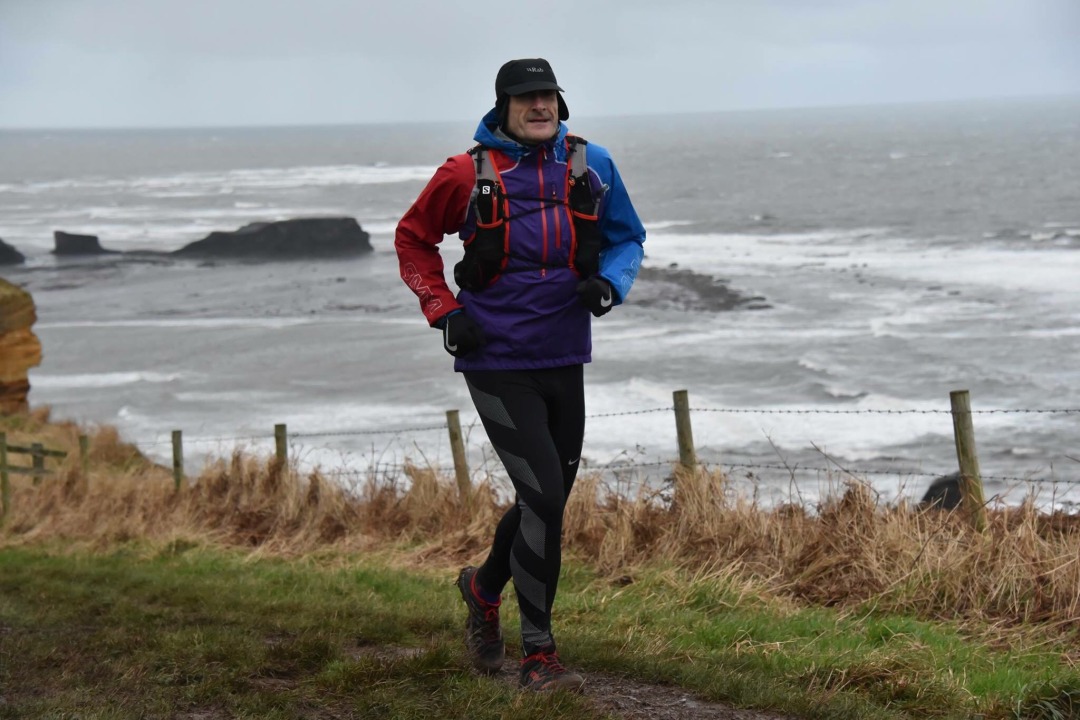 The coastal path always plays tricks on you. You always think the next bay is going to be where you need to be, only to find it isn’t and you have another stretch of muddy land to run across and more steps to ascend / descend!

Eventually Robin Hood’s Bay reappeared and time to grab some food and rehydrate!

The next stage was a gradual climb again on the cinder path of the old railway line all the way to Ravenscar.

If you are not familiar with the area, Ravenscar is the seaside resort that never was. The Victorians had a plan to develop this area into a resort. However it’s exposed location and the difficulty in getting trains up the steep gradient to the top of the cliffs meant that no one invested in it and the plan died!

Basically, I am saying there is nothing there apart from a few houses, a hotel and an old train station!… oh and a Hardmoors 30 race checkpoint!

Back onto the cinder path and the downward leg to Hayburn Wyke (another location that was used often for smuggling many years ago!) and the next checkpoint. This also signifies the furthest point of the race and only another 9 miles or so back to Robin Hoods Bay. This would be on the exposed coastal route again though, and featuring more dramatic scenery than the gradual rise and fall of the old railway line. What that means is that whenever you reach a coastal inlet, you had a steep descent to sea level, then a steep ascent back to the cliff tops! By this point your legs are aching and you are looking forward to the return to Robin Hood’s Bay and the finish!

The ascent from Hayburn Wyke up to Ravenscar seemed to be never ending and was tough due to the conditions underfoot. The constant slipping and sliding was starting to tire my quadriceps muscles. So much so that they started to shown signs of cramping as I ran down the track from the Ravenscar checkpoint (second visit!).

There is a lot of information, some of it conflicting, about muscle cramping on the internet. I had recently been informed about a method to tricking the brain by either sipping a salty liquid (such as pickle juice! – not yet readily available at race checkpoints 😀 ) or placing a pinch of salt at the back of your tongue, as well as resting for a moment and stretching the affected muscle. I had placed a few of the sachets of salt you get from fast food restaurants in my pack so I thought I would give this a go. Not quite a scientific experiment, but it seemed to work and I was not affected again! Although I do need to trial this some more to see if it actually works (search: ‘salts trick your brain cramp’ on Google and see the results!)

The run back to Robin Hood’s Bay from Ravenscar is a shorter distance than the run to it due to the curvature, away from the coast, of the old railway track. The coastal path is more direct. However there was still a couple of inlets to drop down to including Boggle Hole. However I knew that after climbing back out of Boggle Hole, I would be back in Robin Hood’s Bay. The only sting in the tail then is that the finish point is at the top of a steep climb out of the village. By this point I was resigned to walking and took my time, although I was aiming to get a finish time under 6 hours 30 minutes, so was keeping my eye on the time too. Finally I was on the last stretch along the road to the finish at the village hall.

As usual, all finishers get a round of applause as the give their number to the ‘staff’ at the finish. Then it was a case of getting my medal and finishers t-shirt before sitting down for a cup of tea and some much needed food!

All in all it was another positive experience for me:

Good points: My kit choice was spot on from my merino base layer, OMM Kamleika Jacket, to my now ‘go to’ muddy trail shoe of choice the Inov8 X-Claw.

I nibbled on Medjool dates early on in the race and grabbed salted peanuts at the checkpoints. Towards the last section of the race I sipped coke cola from my bottle (another recent tip; to avoid feeling drained towards the end of a race – the idea being that you only need a teaspoon of sugar in your blood to keep you going. Any more in your stomach could cause stomach discomfort!)

Although the first part of the race was fast, I was pleased with my pacing strategy. I was aiming for somewhere between 6.00 hours and 6.30. I was just under!

There are still some areas to improve upon that mainly relate to my fitness over long distance. I need to make sure that I keep my pace to a level where I do not run out of glycogen too quickly and suffer from dizziness and gastro-intestinal distress.

Thanks to Jon and Shirley Steele for organizing this race and the Hardmoors series. I cannot imagine falling out of love with these races!