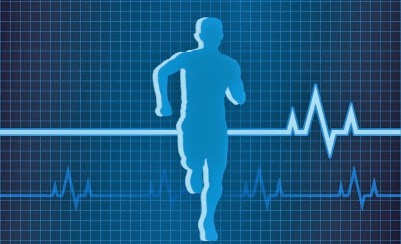 I mentioned in my profile that I have been diagnosed with ‘Long QT Syndrome’. Now is maybe a good point to explain what that is and what it means.

Basically it is the result of what you might class as a ‘faulty electrical signal to the heart’ Apparently it only appears in 1 in every 200 people (I don’t like to be classed as common!) and is normally due to a genetic defect.

This causes a delay in the electrical impulse to the heart and causes what is known as ‘prolonged repolarisation’ When I have an electrocardiogram (ECG) this shows up as a long QT interval which is part of a heart beat cycle (the diagram below should show this a bit clearer!) 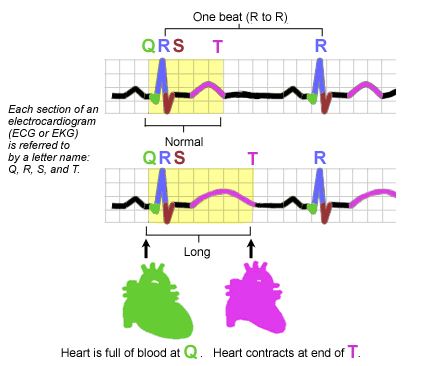 There are basically two abnormalities associated with LQTS. In most cases the movement of potassium ions from the inside to the outside of heart cells is affected which affects the ‘repolarisation’ or resetting of the heart.  In a smaller proportion the sodium or calcium channels are affected. The resulting effect is the same.

However there are currently 13 known types of LQTS depending upon inherited gene mutations. Some of these are given names associated with the person who discovered them such as Romano-Ward syndrome, Jervell and Lange-Nielson syndrome and Timothy syndrome.

I don’t know which type I have, but currently undergoing genetic testing which may identify it.

Why worry about it?

The symptoms vary greatly in severity and depend upon a few factors such as: your age; gender; abnormality type; and length of the QT interval. Having a long QT interval may not give you any symptoms, at the other end of the scale some types are associated with sudden death relating to exercise.

As far as I am concerned I have been involved with physical exercise all my life and have never not been active in one sport or another. I have though over the last 24 years had four occurrences of unexplained syncope (syncope being the medical term for fainting or blackouts). The last two of these were in 2014 (6 months apart) and led to further investigation with my cardiologist.

There is no clear evidence that this was caused by an arrhythmia brought on by the LQTS, however there is evidence of LQTS in one of the ECG traces after the first collapse in 2014. The concerning factor for the cardiologist was that these both occurred whilst I was out running. This led to a lot of further tests such as ultrasound, angiogram, exercise stress testing, and wearing a portable ECG recorder (called an holster monitor) for 24 hours. None of these showed signs of LQTS or any other issues. Still concerned the cardiologist suggested fitting a ‘Reveal’ device. This is a device the size of a matchstick that is inserted under the skin, near the heart, and records the heartbeat on a loop (that rewrites every ten to fifteen minutes). Any abnormalities are retained as are any instances that I want to ‘bookmark’ (using a handheld device to ‘timestamp’ an event). This was fitted almost 26 months ago and until recently showed nothing untoward. 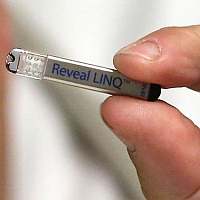 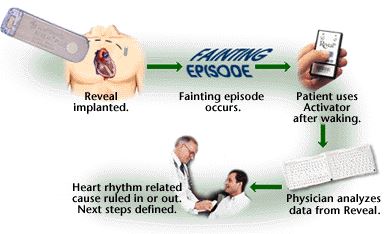 Image above of the ‘Reveal’ Loop recorder and how it works.

All the tests looking at the structure of my heart and looking for any damage have showed that my heart and associated plumbing is in very good health, typical of someone who is physically active an has never smoked or drank excessively.

However a recent check up, at the ‘pacemaker clinic’ where they check my ‘reveal’ device, showed instances of my heart stopping and restarting whilst asleep. Nothing too untoward there as it is quite common (as long as it restarts after a couple of missed beats). But a subsequent ECG showed signs of LQTS again.

The cardiologist told me that the normal treatment for this is with drugs – Beta Blockers. The downside to that  would be a reduction in my heart rate. Bearing in mind my resting heart rate is about 40 – 42 beats per minute (way below average), and my heart sometimes stops beating during the night then this doesn’t sound a good idea. To counteract that they would fit a pacemaker to stop my heart rate getting too low. So, they will slow down my heart rate with beta blockers, then speed it back up with a pacemaker………….wtf?

Google ‘ Beta blockers’ and you will see a lot of articles about how they make you lethargic, sleepy, dizzy amongst other side effects. They are a treatment for depression as well as for arrhythmias. I do not need this and would rather risk the consequences of not taking them than suffer the side effects.

One good thing is that the cardiologist didn’t advise me to stop running. I doubt that I would have followed his advice anyway. There are many ‘Cardiac Athletes’ out there pursuing physical activity even after heart transplant surgery!
I have not had any symptoms of the LQTS for 30 months now. I am currently undergoing further and repeated testing, ultrasound, exercise stress test, genetics testing and holster monitor test. The cardiologist will then review these and see which way to go. Bearing in mind my refusal to go down the beta blocker and pacemaker route, I may finish up with an ICD (Implantable Cardioverter Defibrillator) fitted which will give an electric shock to my heart if it stops beating or beats too high.

I am currently researching as much as I can about LQTS and sporting activity. I think the medical fraternity are very cautious with regards to advise they give. They wont say you are okay to exercise if the risks of something going wrong result in being taken to court for giving unsuitable advice. A recent article I found from the USA stated that you are okay, in certain cases, to resume physical exercise, however it must be a class IA sport!

I’m sorry but I don’t think any competitive athlete will be satisfied with being informed that they are okay to take up sports such as Billiards, Golf or Riflery……maybe Riflery would be okay coupled with cross country skiing as they do in the winter sport of Biathlon!

My plan is to continue as I am with certain modifications (taken after reading an excellent book by John Mandrola and Lennard Zinn called ‘The Haywire Heart – how too much exercise can kill you and what you need to do to protect your heart’ – which will be reviewed in a future blog) regarding ensuring adequate rest and recovery time and ensuring you are hydrated and not in a state of salt / electrolyte depletion.

Speaking of which……I know for a fact that three of the four occasions, when I have passed out, occurred when my hydration levels / electrolyte levels could have been compromised. One happened after a long run in Majorca, after drinking approximately 2 litres of water very soon after a run in hot weather! The two in 2014 were both during heavy periods of training (for Ultra Marathons). Whether this had an influence on the arrhythmia I will never know but bearing in mind the fact that electrolytes are essential for the efficient operation of the heart then 2+2=4 in my eyes!

I will keep you updated on future developments. Meanwhile I would love to hear of any similar experiences and thoughts on exercise with heart arrhythmias.

Note: I do not claim to be a Doctor, nor educated in medicine. All views are my own and not to be taken as advice!