Over the years I have had a love / hate relationship with treadmills.

I have used them when training has been impossible outdoors such as a twenty mile long run when it was snowing heavily; or using a treadmill at a hotel gym when abroad as the weather was too hot (for me) to run outdoors.

However recently I have embraced the dreaded treadmill and I am now using it on a regular basis as part of my training. The main reason for this is the development of Zwift to include running as well as cycling.

For those of you not familiar with Zwift, it was developed back in 2014/15 as a means of training, interacting and competing against other athletes in a virtual world. It is basically a videogame where you are riding or running with other people from around the world in realtime. It has revolutionised cycling indoors with thousands of cyclists online at any time during the day and has many races, training programs, social events for cycling to keep you engaged in what was traditionally a very boring and tedious way to train.

The popularity of Zwift for cycling is evident in the numbers of riders online at any time of the day!

More recently Zwift added running. How this works is that it picks up your foot movements via a pod fitted to your shoe (such as a Garmin, Stryd or there is now available a Zwift footpod) and this is transmitted via Bluetooth or ANT+ to your computer (or phone / tablet) so your avatar moves in time with you. Initially Zwift developed a virtual world called ‘Watopia’ that you rode / ran in. Now you can run in New York, London, Insbruck, Richmond or Watopia (with more routes / cities being developed all the time) with some having dedicated running lanes/ tracks. 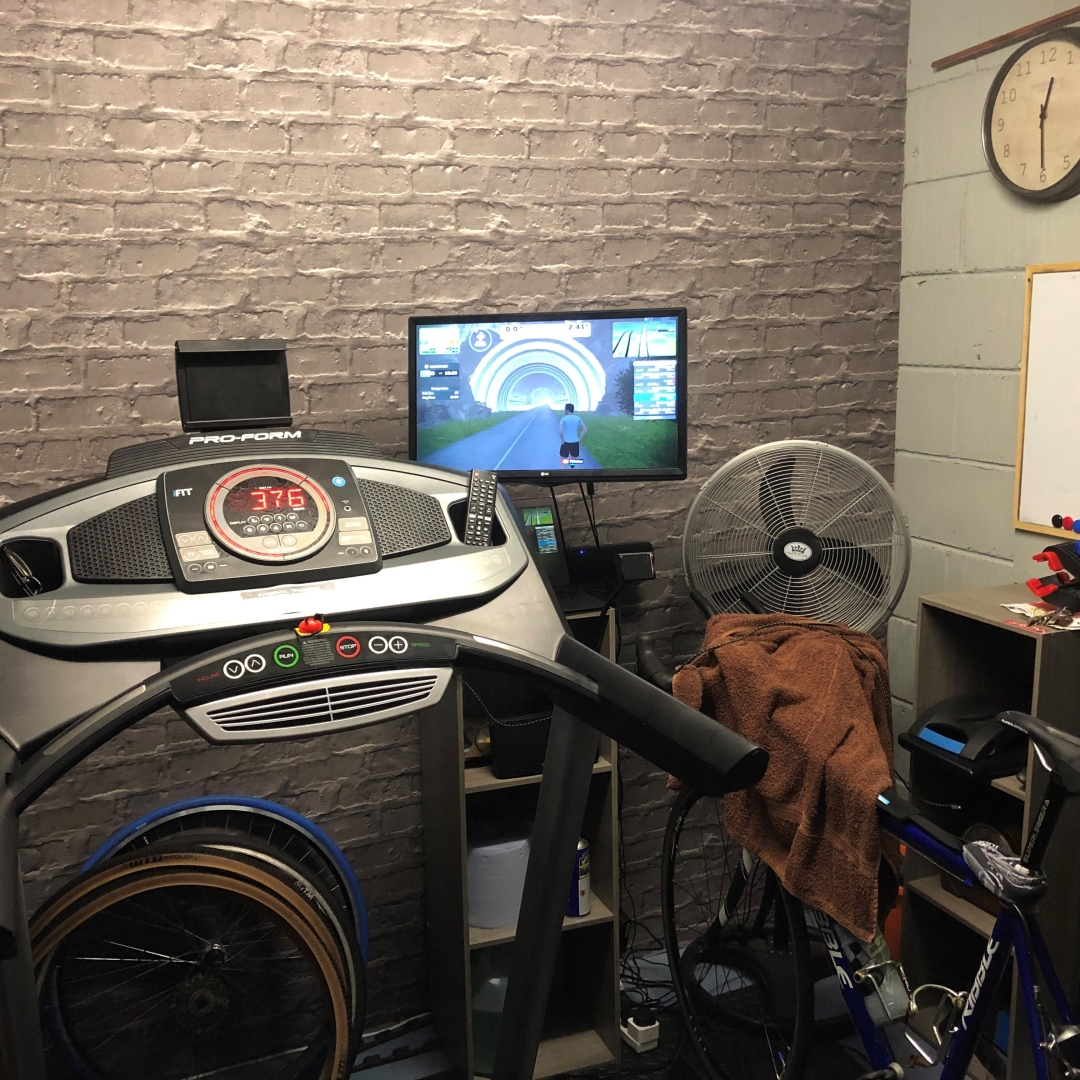 My ‘pain cave’ set up for cycling and running on Zwift! Large fan essential, even in the cold weather we have recently seen in the UK!

One main difference between running and cycling on Zwift is the interaction of technology. Smart trainers for cycling mean that changes in terrain (such as hills) result in changes in resistance at your bike so that it actually feels like you are cycling uphill (expensive turbo trainers also allow you to freewheel downhill without the bike actually stopping!). This ability to change the resistance is ideal for training programs where you are doing interval training or such like, so the resistance will automatically increase or decrease at the desired interval to the programmed power setting.

Run analysis is available on screen at the end of the run! This can also be downloaded to Training Peaks, Garmin Connect etc.

I doubt whether this functionality would ever be allowed for running. No manufacturer would want a lawsuit against then because a treadmill has suddenly increased from 10 min mile pace to 6 min mile pace and you flying off the back of the treadmill (at worst case, on a bike, large increases in power required would only result in you grinding to a halt!) So you have to manually change the speed of your treadmill. Another challenge (depending upon how accurate you want to be!) is ensuring you have calibrated the treadmill you are on such that it’s speed corresponds to what is shown on Zwift. Most treadmills are not calibrated and I discovered mine to be running slower than what is shown on the treadmill by 11%. I had to factor that into the calibration.

As in the cycling mode, you can cusotmise the avatar to look as much like you as possible and with a choice of running outfits!

Zwift have announced further investment into Zwift and this includes the running side of it. Already we are seeing more running tracks and hopefully we will see more training programs for running. I still believe that the beauty of running is that all you need is a pair of trainers and somewhere safe to run, but I will be using Zwift to add some further interest into running and to compliment my training especially during the winter months

Do you use Zwift or a treadmill to compliment your training, or do you feel that this is a step too far?